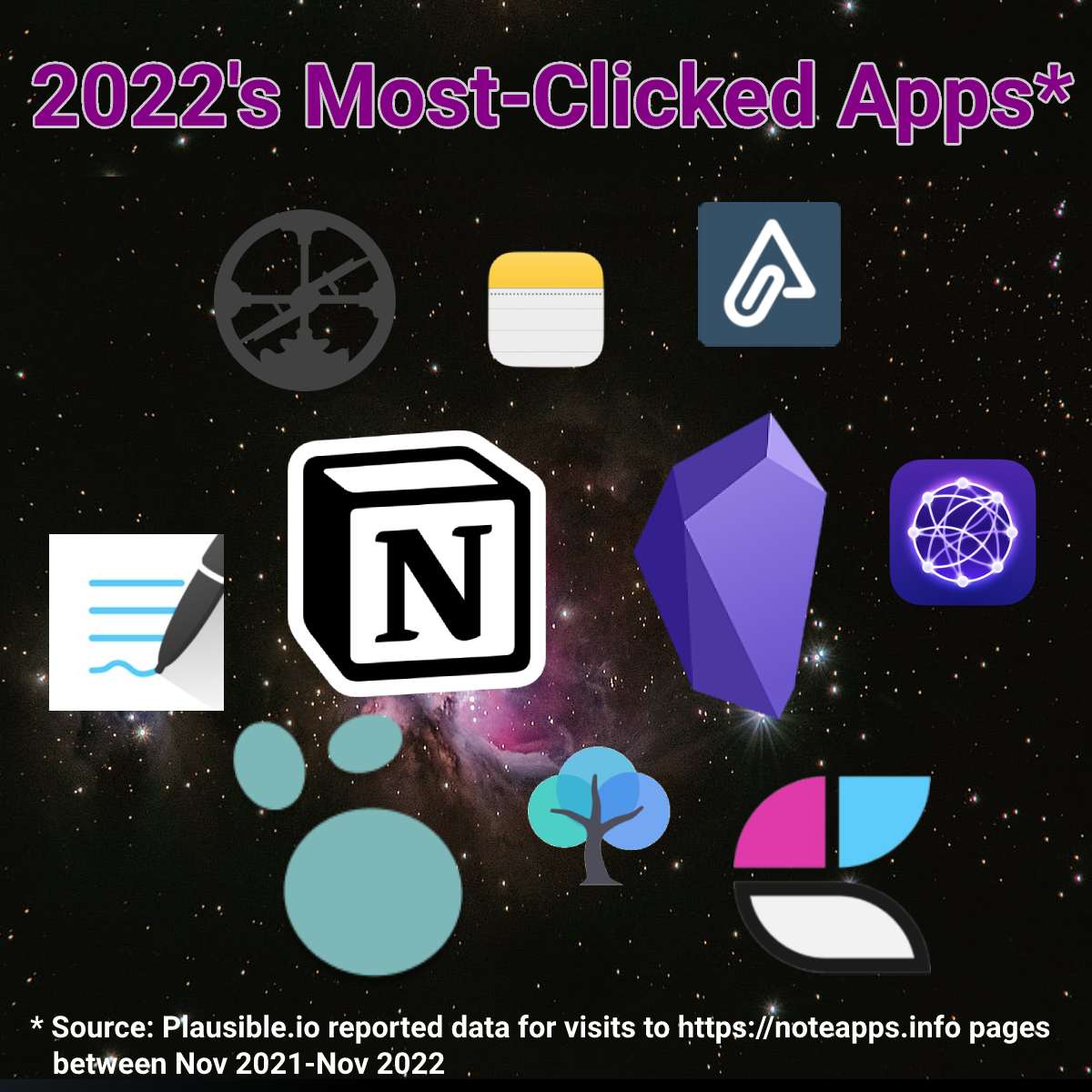 A recent Twitter thread started by Tiago Forte﻿ asked his followers which note apps they were most excited to learn about. His question﻿ conveys the implication that the top 7 note apps of 2022 still include first-gen apps﻿ like "OneNote" and "Evernote." Do they? It got us curious whether our data might say about whether modern note takers remain compelled by the idea of switching to the "classic" note taking apps?

linkThe juiciest version of a question like Tiago's might be phrased: "which note apps sparked the most curiosity during 2022?"

As NoteApps.info has progressively grown to catalog 28 apps, evaluating almost 300 features for each, our collection of visitors has grown to represent a cross-section of demographics:

The least you need to know about NoteApps viewers? First, that Google dwarfs any other source﻿ aside from direct visitors. How do people find NoteApps from Google? It depends. Sometimes "[app name] alternative." More often, long-tail questions like "Does app X have Y feature?" or "App X vs. App Y"

Regardless of the source that led to the page, a user must choose to click a link to the app to show in stats (i.e., no automatic redirects send users to these pages). These intentional clicks can be construed as a "vote" of sorts among users contemplating an app switch. Their click is a small proof point that said app has shown enough promise to get the user curious about switching.

Compared to social media surveys asking about favorite apps, this data probably better represents a more random sample of users. To respond to a Twitter or Youtube poll, one must be in the distinct minority that maintains an account on those platforms. Depending on where the survey gets linked from (e.g., message boards for an app), data from social media sites can be tilted by marketing efforts. In contrast, the NoteApps audience is a relatively broad & independent cross-section of "anyone who searches Google for terms related to note taking."

Without further ado, here were the apps that sparked the most intrigue between November 2021-November 2022. Note that it has some important caveats to consider, specified below (spoiler: Amplenote isn't really the intrigue-generating app when taking into account all factors). 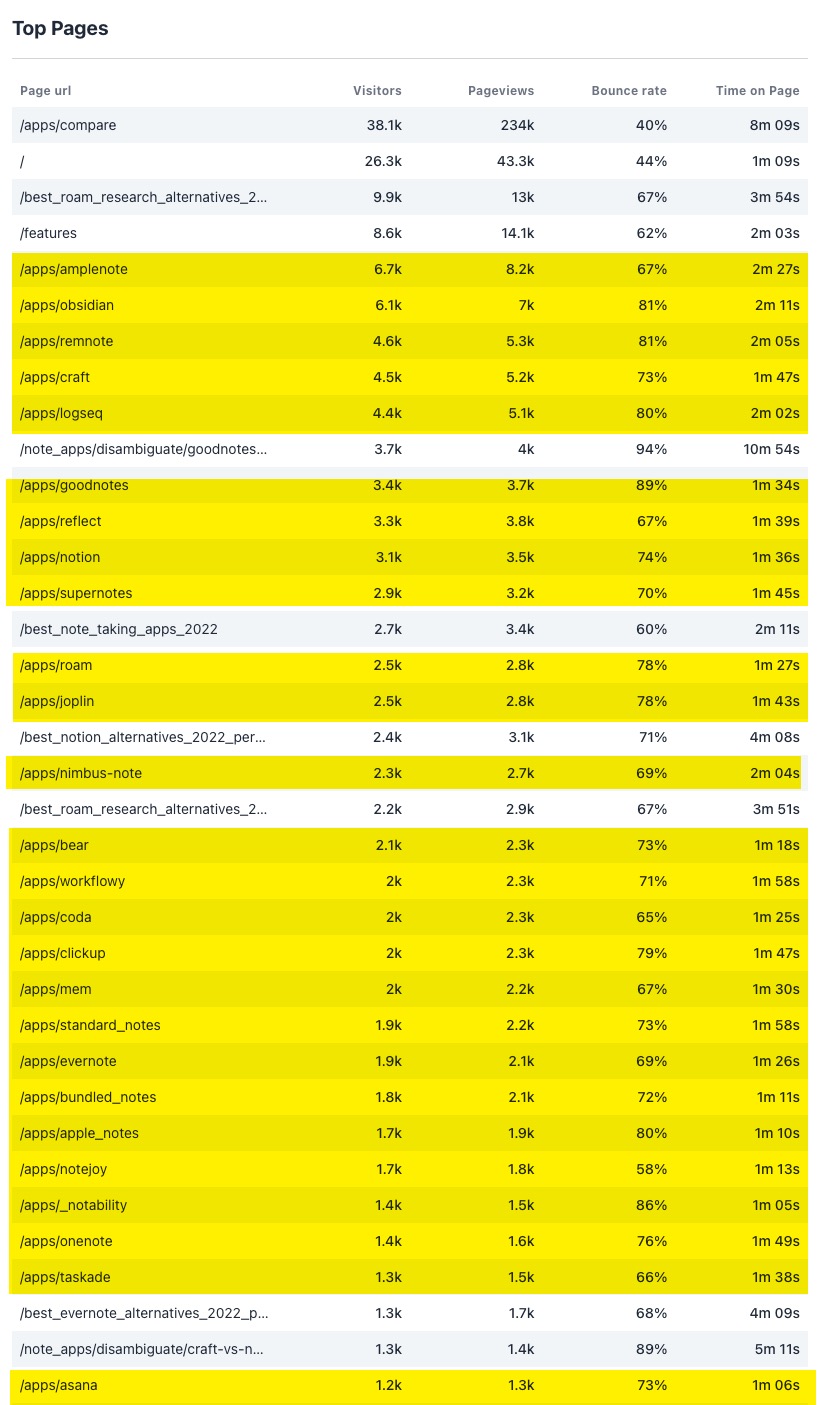 2022 data on which note apps visitors clicked most. Per the "Caveats" section below -- Amplenote isn't really the #1 app.

Before we jump into the caveats, it might raise eyebrows to see "OneNote" so far down the list. For at least a decade, Onenote was a juggernaut, and the perfect default note solution for WIndows users. Has it really fallen so far out of favor that a niche app like "Bundled Notes" is more popular with users these days? No.

The more accurate story of OneNote starts by checking its Google Trends over the past five years vs the other First Generation Note Apps﻿. This data says that OneNote has effectively "held serve" over a time range where competitors were much more volatile. Evernote peaked at 32 interest 5 years ago, and has recently dropped to 12. Notion started around 10 interest in 2016, before surging as high as 100 in August of 2022. 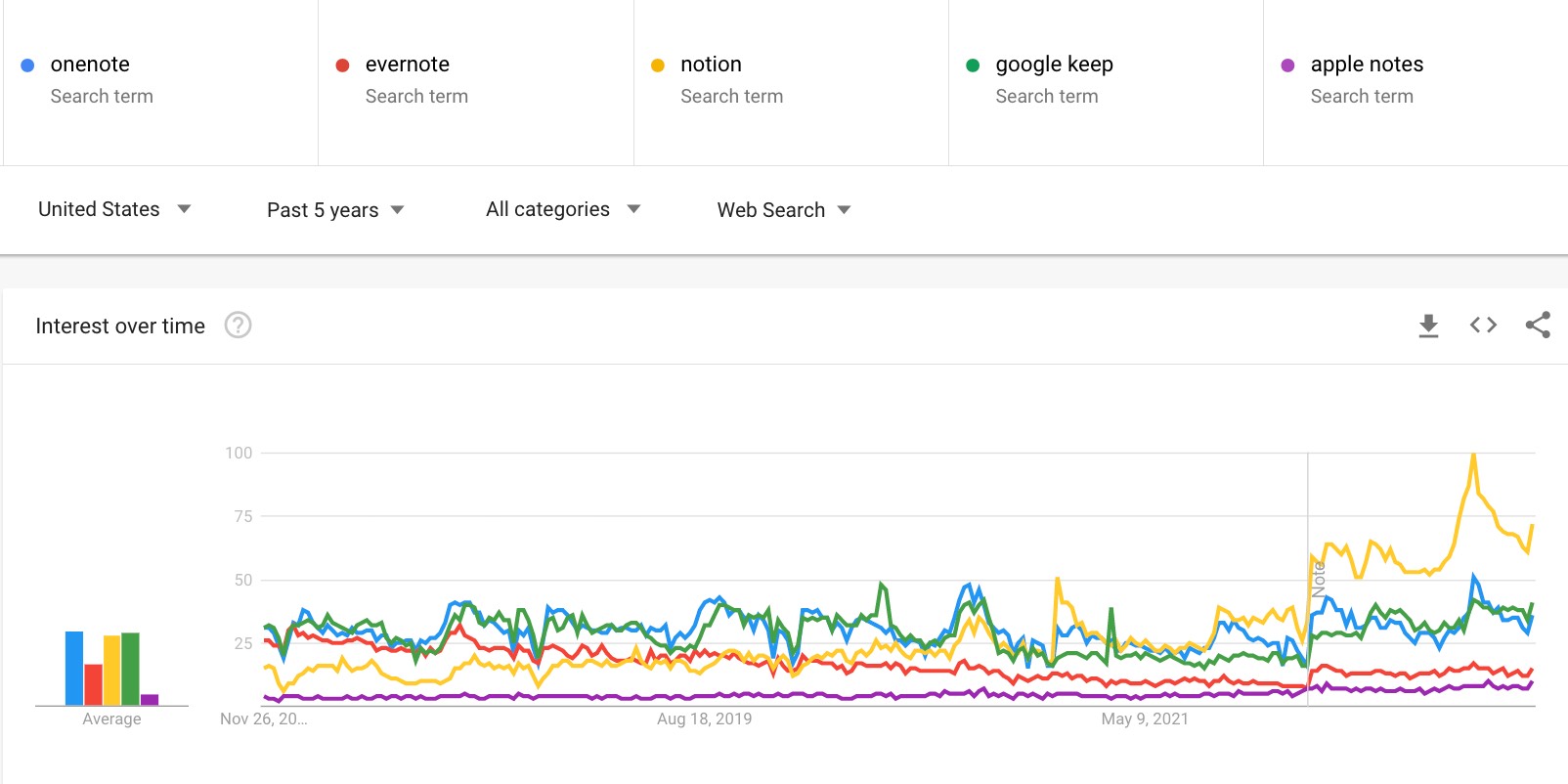 One possible explanation for the discrepancy between Google Trends and NoteApps visits is that users are viewing NoteApps data when they are contemplating a change. It's impressive that Microsoft has maintained stasis with OneNote during a period of tumult for its competitors. But "holding serve" may not correlate with new user enthusiasm? 5 years ago, N OneNote users were searching Google for how to share all the notes in a tag. Today, those same OneNote users might be searching Google for how to link between notes.

It's hard to make any definitive statement on how many are choosing Onenote over more modern apps as of 2022, but it is seems true that NoteApps data gives short shrift to OneNote among our feature-hunting audience.

In addition to the OneNote example suggesting an app can be widely used but generate little user excitement, there are several other important caveats to factor in when interpreting the consequence of the data shown above.

Few note apps link to NoteApps.info, but Amplenote does. Because of this, the number of users that visit the Amplenote note page is artificially high since it's not just Google users who visit. Thankfully, our web analytics lets us pinpoint how many of the Amplenote profile view came from referred users: 1,006 of the app views came from 1.5k visits of Amplenote users﻿. Thus, in the adjusted data table below, we deducted 1k visitors from /apps/amplenote to make it more apples-to-apples with other apps whose visits come from Google & browsing NoteApps generally.

A major factor in whether Google presents a NoteApps result is "how many other reputable pages are available to answer the question?" First Generation Note Apps have several providers competing to help users differentiate between "OneNote vs. Evernote", compared to say, "Logseq vs. Roam", where NoteApps is one of the few websites that knows about both apps and has significant data to enable a comparison. The net effect is that: the longer the app has been around, the more competitive Google search will be for queries about the app, and the less user interest will be reflected in NoteApps view data. It's unclear how this could be numerically incorporated into the adjusted data table﻿, but it's worth mentioning, since it probably drags down clicks on first generation apps, maybe by 50%?

Not all apps have been cataloged by NoteApps over the entire time window. Further review indicates that all of the apps shown in the list were available to be viewed on NoteApps as of November 2021.

Reducing Amplenote views by the share of referred users yields the adjusted table of top 10 apps of 2022 by user click engagement:

We will continue to update this table if we think of additional methods by which to normalize the data. Feel free to drop us a line on Twitter if you have ideas on what other extenuating factors could be incorporated to improve the data quality?