As an Engineering Manager, you need to know what your developers are working on. But where to start?

It's hard to remember what a developer was working on last week, let alone 9 months ago. It takes time to leaf through old commits and find specific project details. The prospects are worse still if you hope to correlate past commits to the issue tracker tickets they closed (i.e., to remember the biggest Jiras the developer completed over past year). And it can be difficult to determine the developer’s strengths, or measure how much they’ve improved in a specific area.

link1. How is this developer performing overall? 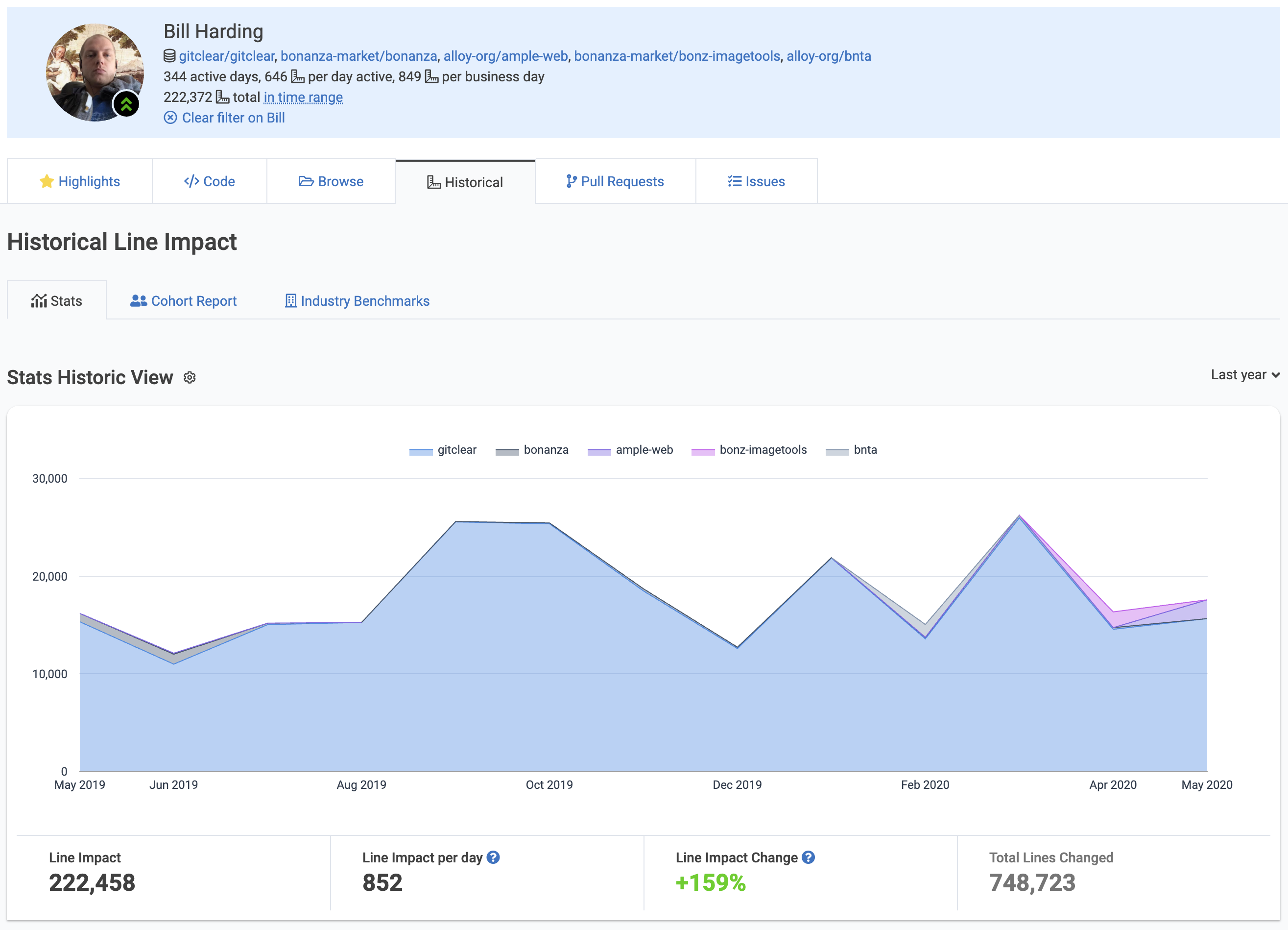 In the past, there hasn’t been an easy make sense of a developer's coding activity. For example, no one would base a review solely on how many new lines of code a developer has written. Refactoring or removing code is often more valuable than adding lines anyway.

That’s why we created Line Impact, a metric that GitClear uses to measure developer activity. If you’re new to GitClear, learn more about how Line Impact works﻿ and why we focus on a single, reliable metric﻿ for measuring developers.

While Line Impact is not equivalent to productivity﻿, this chart still provides a great starting point to get everyone on the same page.

link2. Have we helped this developer ramp up as quickly as past hires?

The Cohort Comparison graph illustrates how quickly the developer has been onboarding relative to past hires at a point of equivalent tenure (i.e., how did everyone fare on the 20th week?)

Coding is not a competition, but there is value in comparing developers’ performances in specific categories to one another. An example from our own team: we were able to identify one of our developers as a consistent top performer in view and style code (HTML, HAML, CSS). Now that we know they have a knack for writing front-end code, we can match them up with this type of work in the future. It’s a win–win for the quality of our code and developer productivity.

Enter the Cohort Comparison tool. The idea behind it is that you can compare developers at an equivalent point in their tenure to ensure that each developer you hire is (hopefully!) ramping up faster than the one before. This is an attainable goal if you continue to improve documentation, environment setup, and coding activity visibility.

These comparisons can be a game changer for managers when it comes time to match developers with the projects they are best suited for.

link3. What were this developer’s biggest projects this year?

A list of the biggest Jira tickets closed, by month, over the past year. Time range is configurable.

It’s easy enough to recall that large project that a developer worked on last month, but how about last spring? What were they working on then, and what exactly did those projects entail? Before you spend an hour searching through old Jiras to find out, try the Top Projects tool.

The Top Projects tool shows the projects with the largest Line Impact that the developer worked on each month. You can also connect GitClear to Jira or another issue mapping software, so you can easily see how commits relate to tasks your team is working on.

With Top Projects, our managers went from spending hours finding and reviewing the many projects a developer worked on, to spending a few minutes looking at their top projects consolidated on one page.

link4. What other skills does this developer contribute to the team?

A collection of badges that can be earned over time

Code metrics don't always tell the whole story. Perhaps someone on your team is taking time to mentor junior developers, or putting the extra effort into automating a repetitive task. These are important things to note in performance reviews as well.

With this in mind, we created Badges. Who doesn’t like collecting awards?

Badges are a great way to give recognition for the exemplary and varied work done by your team. There are two types: auto-assigned and admin-assigned.

Auto-assigned badges are awarded by GitClear when the developer meets a certain criteria. Some examples:

Parachute: Directed at least 10% of a month's code toward writing tests

Linguist: Contributed in more than 5 languages over the month

Honor Roll: Held the top spot on the leaderboard over 5 straight business days

Managers can also award badges to developers as a way of recognizing achievements, or for going above and beyond the call of duty. Some examples:

Sage: Mentored a junior dev in a meaningful way

Swan: Refactored code that used to be ugly

Badges help developers feel recognized, and they give managers an easy way to track extra efforts and milestones throughout the year.

link5. How can I remember the biggest learning opportunities over the course of the year?

Private or public manager notes are available from any developer's profile

Qualitative feedback from a developer’s teammates is an important complement to quantitative data. However, it’s easy to lose track of information like that months down the road. It also costs you valuable time to ask everyone on your team what they think about a developer’s performance.

Fear not: the Notes tool on the Performance Review page makes it easy for managers to leave feedback about a developer anytime. Perhaps a manager was impressed by the way a developer solved an issue, or there was a specific time the developer stepped up to the plate, and their project manager wants to remember it. You can view all this important feedback in one place, making your next performance review that much easier and helping you remember all the awesome things your team has accomplished.

In case you were wondering, you can choose to hide or share notes with the developer.

link6. How can I be sure these measurements are accurate?

All this data would be useless if it wasn’t transparent, accurate, and consistent with your business’s values. Everyone on your team benefits from knowing what's being measured, how, and why.

That’s why we’ve engineered Line Impact to be fully transparent and customizable for your business’s needs. You can fine tune how GitClear calculates your Line Impact scores﻿ anytime.

We’d be remiss if we didn’t mention that the Performance Review page provides great personal value for developers, as well! Developers can view their own Performance Review page, helping them track their progress over time. They can use this page to determine their strengths and weaknesses, gather accomplishments to mention in their next review, and make a compelling case for future projects they’d like to be included on. GitClear’s Performance Reviews are built to empower the whole team with better data – not just managers.