GitClear's Domain Experts report is built to help managers or senior team members pair Jira tickets with developers who have the greatest proficiency in the technologies that will be needed to complete the task.

The report is available to all Elite or Enterprise members under the "Issues" tab and the "Domain Experts" secondary tab: 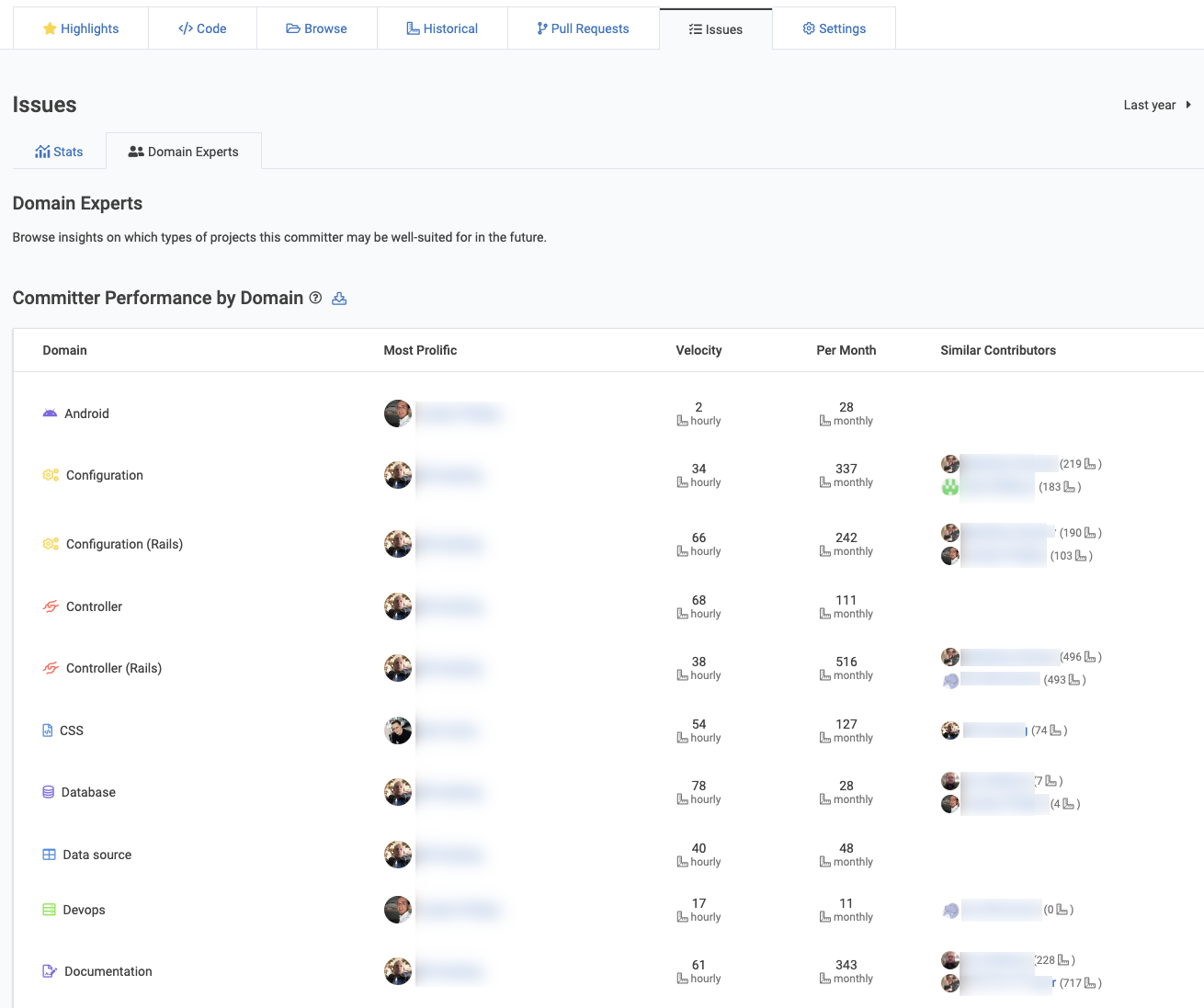 The Domain Experts report, when viewed without a developer selected (so to show the entire team). This report indicates which developers are most prolific in each type of technology used by the resource (entity, organization, or repo) selected and team

The Domain Experts report is available as either a team-wide report (as shown in the screenshot above), where it will show the most prolific developer by Code Domain, or on an individual-developer basis (by selecting a developer from the top dropdown), which will let a developer see which teammates they can look to as they seek to gain expertise within a Code Domain. 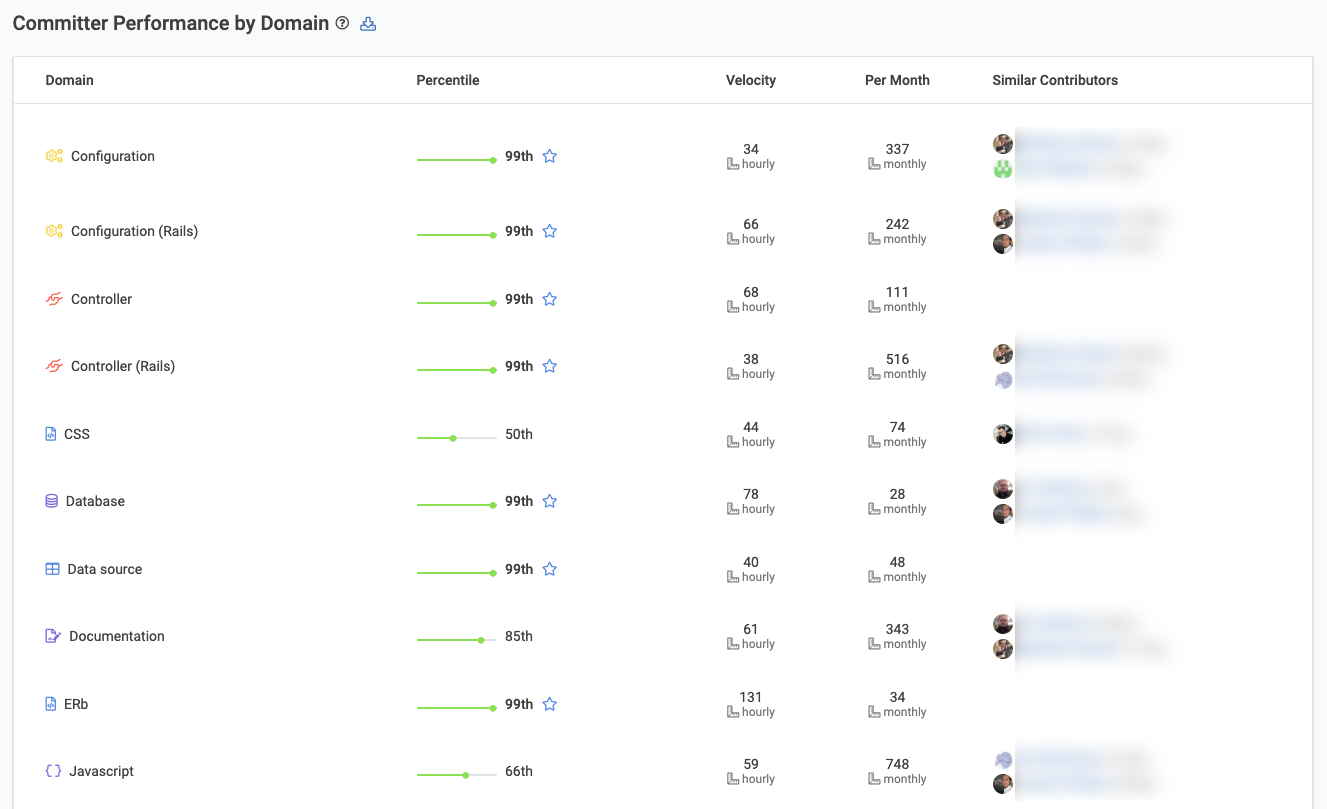 Domain Experts report when a developer has been selected. In this case, it will show what percentile of Diff Delta the developer has accumulated on a per-Code Domain basis relative to their peers

Only an individual contributor can see their own Code Category percentile data, unless they explicitly grant access to other teammates/managers, in accordance with our policy to build the most developer-friendly analytics tool﻿.

A quick overview of each of the columns in the Domain Experts report, and how they are tabulated.

Which developer in the selected resource (entity, organization or repo) and team has accumulated the most Diff Delta in this Code Domain over the selected time range? This developer can be utilized as a "subject matter expert" on the type of technology in question, as they have spent more time changing it lately than any other team member.

This column uses the value of the "Per Month" column (as opposed to hourly velocity) to designate the percentile values.

How much Diff Delta per hour does the developer accumulate when they are working on code in a particular Code Domain?

When viewing the team report (i.e., no developer is selected), the velocity shown will be that of the developer featured in the "Most prolific" column.

Over the time range selected, how much Diff Delta was accumulated per month in a particular Code Domain?

When viewing the team report (i.e., no developer is selected), the "Per month" value shown will be that of the developer featured in the "Most prolific" column.

There are many ways the Domain Experts report can be utilized to help improve team efficiency.

The quintessential use case for the Domain Experts report happens when you have a hard Jira ticket in a particular Code Domain and you're trying to choose which developer can be trusted to get the ticket done best? For example, if you have a Jira to implement a new home page, the first candidates you would look toward to tackle a project like that would be those who score high in "html," "CSS," and "controller" code (assuming that you're working on a project that uses those technologies).

If the most prolific developer is already occupied, then the "Similar committers" can be used to consider others who would be especially apt to work on the technology in question.

linkWhat domains is a Junior Developer thriving in?

Once a developer has 10 year of experience under their belt, they're usually pretty confident in where their strengths lie. But for developers who are new to the industry, or new to their team, it's often unclear where their proficiencies lie.

The Domain Experts report helps new developers get answers to these questions. Their "Per Month" Diff Delta in a technology can be interpreted as how much experience they have accumulated in a particular Code Domain. If the developer is making their own choices about the issues they tackle, then the "Per Month" column is also a reflection of the Code Domains that have most piqued their interest.

If the developer has accumulated more than 300 minutes, then this is a pretty solid barometer of the pace at which they evolve code in the particular Code Domain.

linkWhat types of code has the team been writing most?

This question can be especially relevant for teams in the midst of a technology change. If you're trying to actively encourage or discourage the use of a technology, then the Domain Experts report is the perfect destination to evaluate how effective your efforts have been.

linkWhich developers should get questions from the team?

When you're training developers to move into technologies with which they are unfamiliar, it's helpful to recommend somebody they can direct their questions toward. The Domain Experts report allows a manager to recommend which developer is most likely to have the experience to quickly and accurately answer the questions of team members who are new to the Code Domain.