GitClear's can help a Manager or Lead Developer stay on top of their team's pull requests -- including those that may lack recent activity, or seem to be stuck in a churn cycle.

To find PRs that are candidates for intervention, choose Pull Requests from the list of primary tabs, and then click in to the Open PRs subtab. There you'll see a list of pull requests, highlighting lingering PRs, i.e.: those that haven't gotten a comment or change within the past five days: 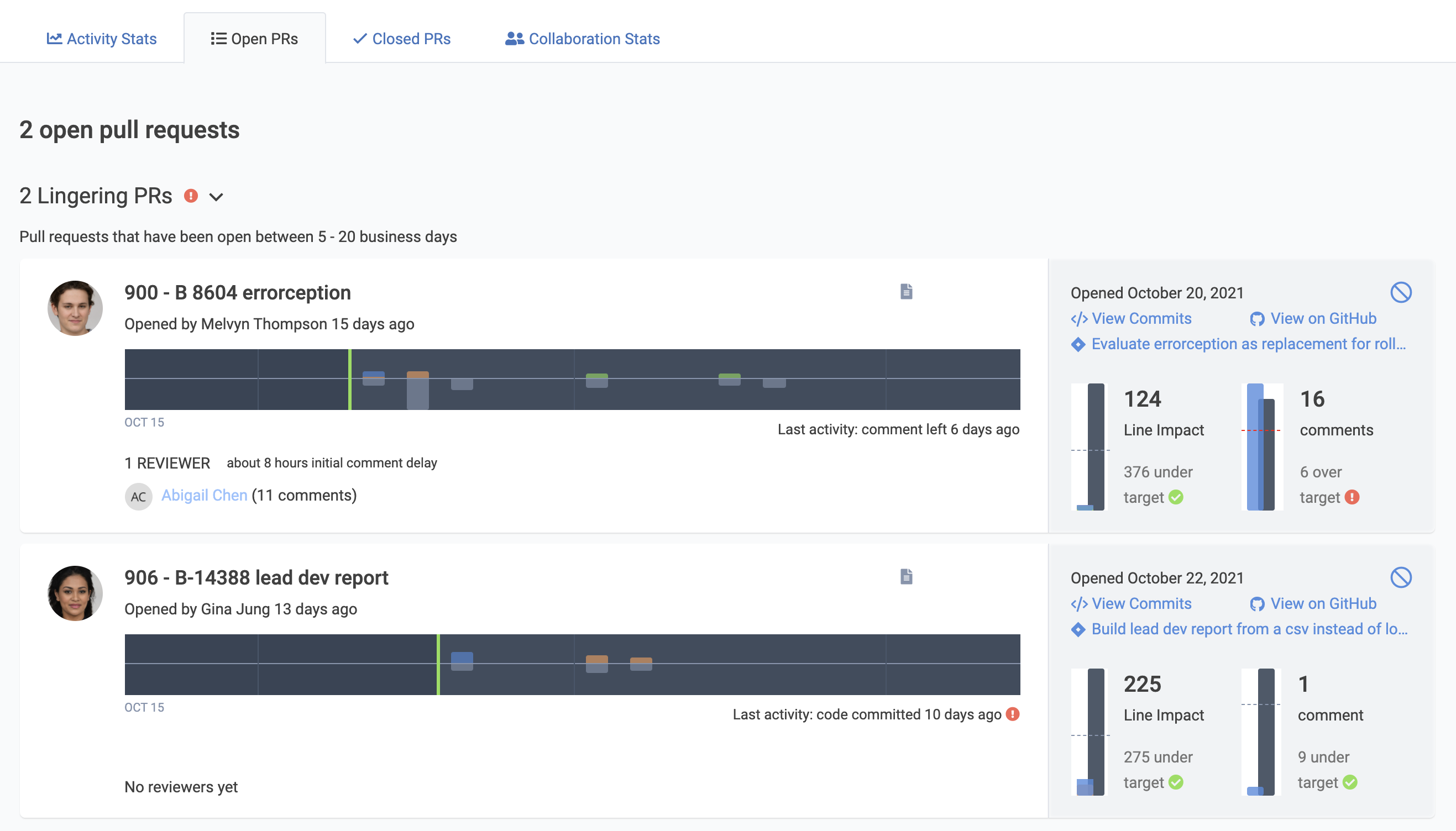 When visiting the "Open PRs" tab, if you have PRs in the "Lingering" state, where they have spent 5+ days since their last meaningful activity, will be highlighted before we list the PRs that are going smoothly, which are lower on the page

if you see a pull request under the "Lingering PRs" section, particularly one labeled as not-recently-active (denoted via the exclamation icon next to the Last activity summary﻿), these are great candidates for conversations to have with your team. You can see a summary of recent actions in the visible graph, which offers valuable clues as to which party would be getting a status update from﻿.

In the first pull request listed above, #900, you can see its last activity was a comment left 6 days ago, and it's seen no activity since. That's not ideal.

It also, despite having a very regular 124 Diff Delta in total (not a large amount for a submitted change), has 16 comments, indicating that it's received a very high volume of commentary relative to its size. You may wish to dig into the PR details ("View on Github" link) to understand what has been driving so much conversation on this PR. Was it deeper discussion about the code, or trivial things like style-guide violations that could have been avoided with a more thorough review by the submitter themselves?

The second PR listed above (#906) has much better stats for both code submitted (Diff Delta) and comments received. But it was open 13 whole days ago, received one-off comments (but no actual reviews), and has remained idle over the past week and a half. That's definitely worth a conversation or two, likely with the assigned reviewers who have given it so little feedback to this point.

Below the section for "Lingering PRs," you can find stats that show other in-progress PRs. These, too, are worth monitoring periodically to ensure that they don't go on far beyond the PR size target that you have set for the team.

Got a PR that's either idle or otherwise irrelevant? No problem. You can easily remove them these PRs from stats by exiling them, by clicking on the icon in the top right of an individual PR:

After you click this, it won't factor towards any aggregate stats in your PRs, nor be shown on the Active or Merged PRs lists.