The GitClear "Tech Debt Inspector" tool is built to sniff out where the tech debt is located within a repo. It will look something like this when visited under the top-level "Browse" tab: 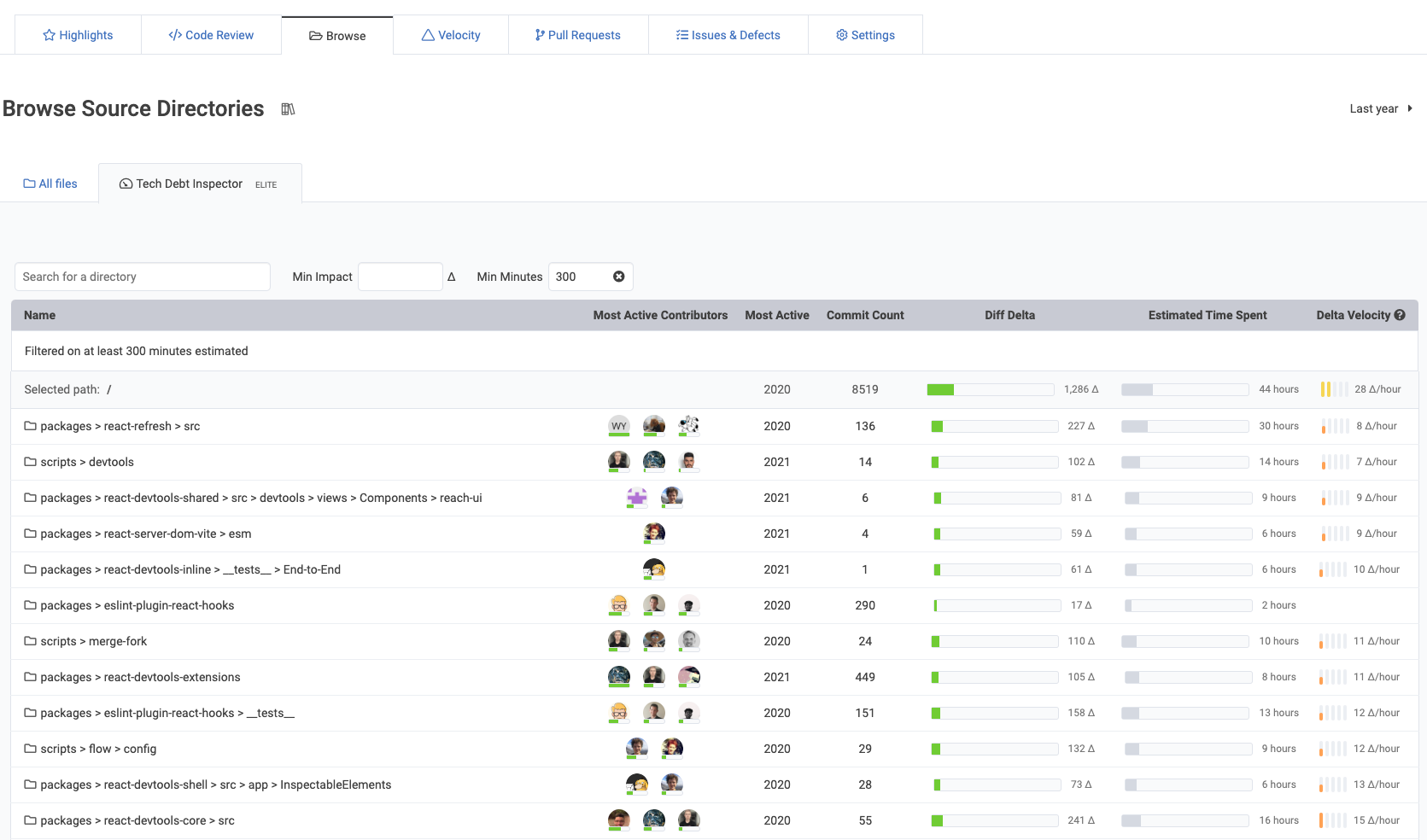 It is available in every repo for customers with an Elite or Enterprise plan.

The term "tech debt" is generally used to describe any code that developers work in that is disproportionately time-consuming to maintain, or prone to causing regressions when modified.

An apt real-world analogy for "tech debt" is "a house with an old roof." You can still live in the house, but the longer you do, the more it leaks and the more you're getting dripped on. You can usually put out cups catch the drips when it rains. But some days, you’re too busy to empty the cups and the carpet will get wet. The “roof” in this analogy is “tech debt.” It’s not inoperable, but every day you let it linger without addressing its deficiency, the problem gets a little bit worse, and it generally hampers your ability to focus on other priorities.

Every commit made to a repo in GitClear is evaluated across many dimensions, including "how much did this commit change the repo?﻿" (i.e., its Diff Delta) and "how long did this commit take for its developer to author﻿?"

linkDeciding which repos to inspect

The first challenge to locate tech debt is to choose which repo to inspect. When you click the "Browse" tab when an Organization or Entity is selected, you'll get a full list of repos as shown below. The most important detail to key in on is "Delta per hour," the rate at which developers are able to make changes within the repo: 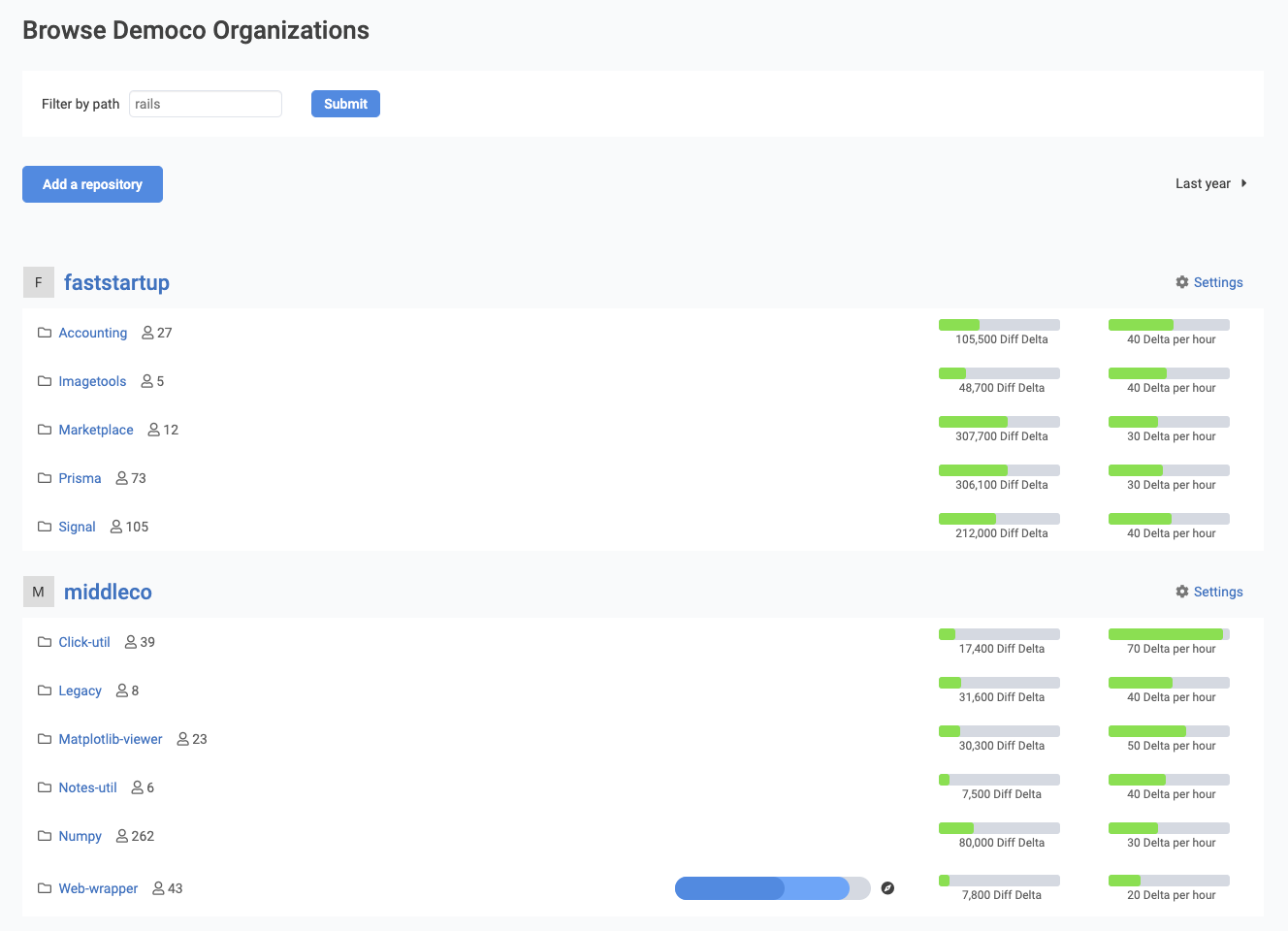 Browsing repos within an entity, Web-Wrapper is the repo that looks to present the biggest challenge for developers to adapt

Another good data point to attend to is the overall amount of Diff Delta for the repo. Repos with a greater Diff Delta are those where more activity is happening, and so improvements to the debt in these repos can yield an outsized improvement to developer throughput. 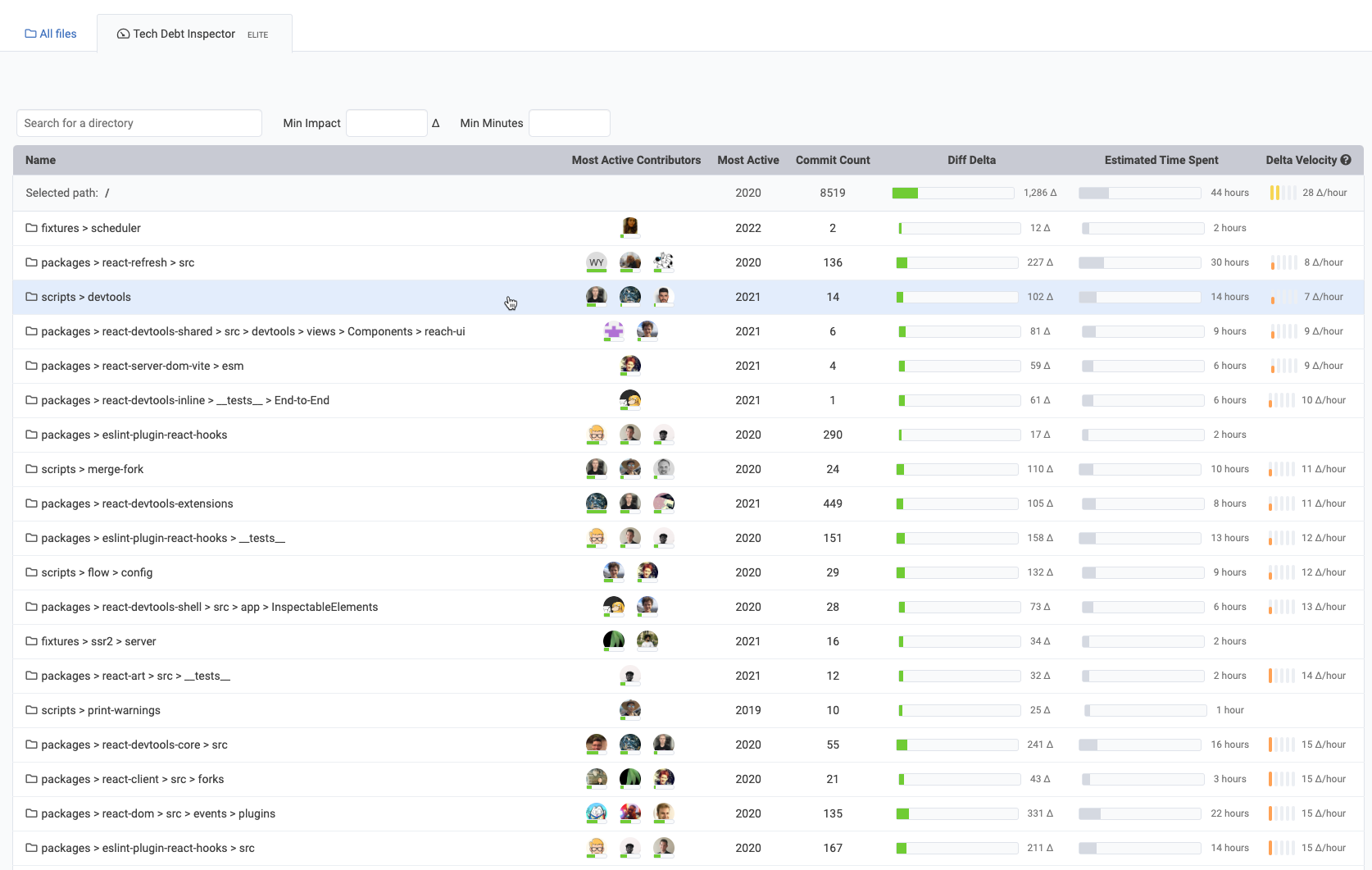 Tech Debt Inspector uses the same columns as the standard GitClear Directory Browser﻿, but the calculation of those column values differs in one very important way.

In the standard Directory Browser, each directory shows the Diff Delta, Estimated Time Spent, and Diff Delta Velocity for files in the directory listed, plus files in all of its subdirectories. In the Tech Debt Inspector, the columns evaluate only files that reside directly within the specific directory listed -- not files that reside in any of its subdirectories. So, in the screenshot above, the script/enterprise folder is listed as the second highest tech debt folder, but that estimate would not include any work that occurred within a file like script/enterprise/anotherdirectory/whatever.py. That work would be accounted for in the script/enterprise/anotherdirectory directory.

Once you find a directory that you'd like to better understand, you can click on the directory to see which files within it are contributing to the low velocity

Then you can click into a file to see how the file has been changing in size and complexity lately: 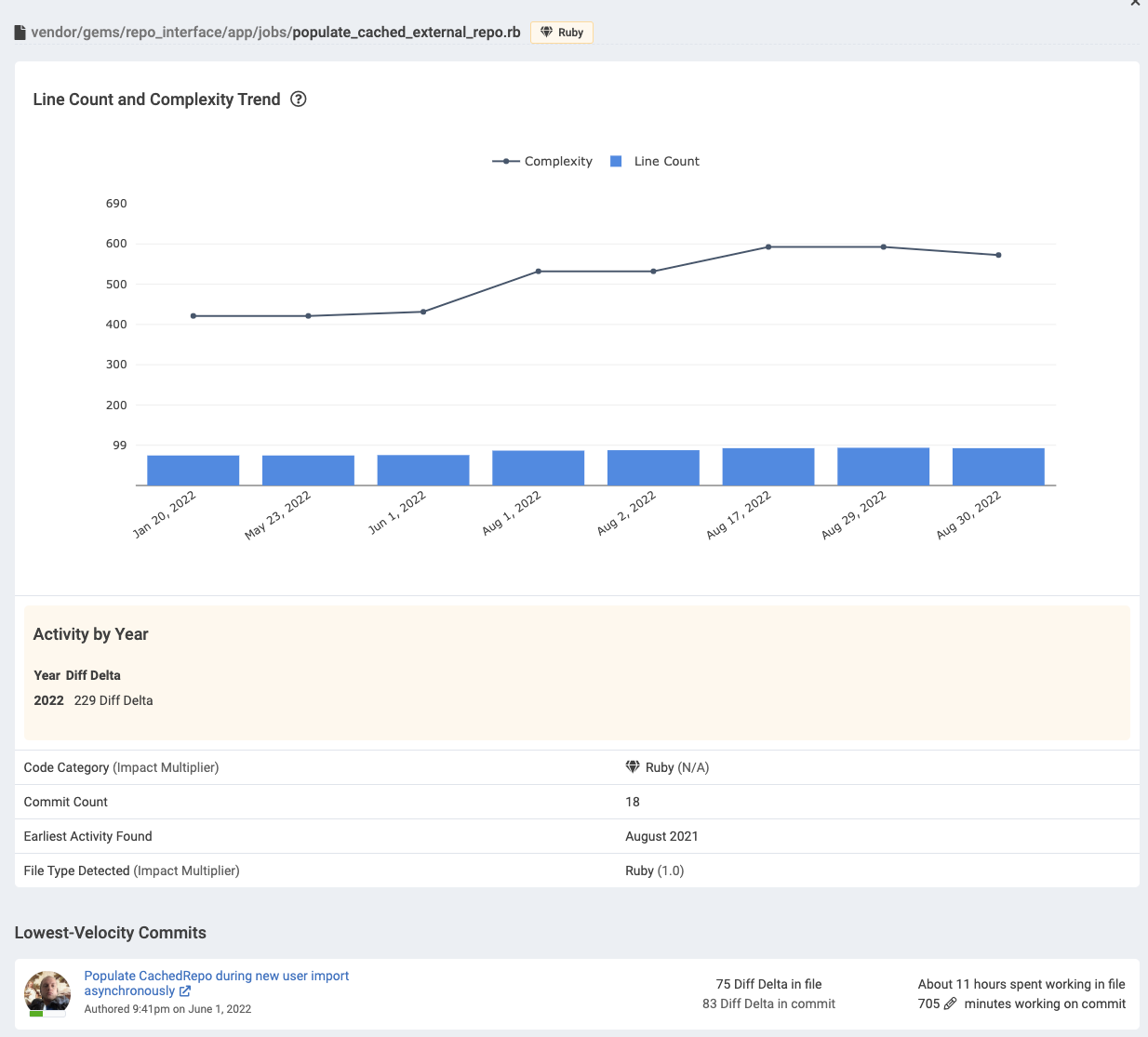 A file that has been growing rapidly in complexity

You see a commit that seems amiss (unreasonably low Diff Delta, or unreasonably high "Estimated Time Spent,") then any user with the permissions to edit Diff Delta or Estimated Time can click into the commit link and adjust those quantities so that a file or directory no longer gets a bad rap for being slow to evolve.

The graph of "lines of code" is fairly self-explanatory. "Complexity" is a measure akin to cyclomatic complexity: the deeper the nested logic in a file, the higher complexity (which approximates indentation depth) will climb.