This proposal seeks a developer capable of working with the OS X Touch API﻿ to create a tool that can record how trackpad input corresponds to cursor movement in OS X. The proposal calls for two deliverables: a data collection utility, and a trackpad visualization utility.

Note that, in the document below, I refer to "trackpad" when I'm discussing the OS X touchpad specifically, since it matches the terminology used by Apple itself﻿. When referring to Linux touchpads, I'll use the term "touchpad."

The structure to hold this data should be of the form:

Each of the Touch objects would include all relevant data from Apple's NSTouch﻿ class, plus a couple other that we can calculate from theirs. Something like this:

For maximum portability, the output of the data collection utility should be stored in JSON within a text file.

This tool supplements the data collection utility, allowing its work to be visualized in real time. It ought to look something like this: 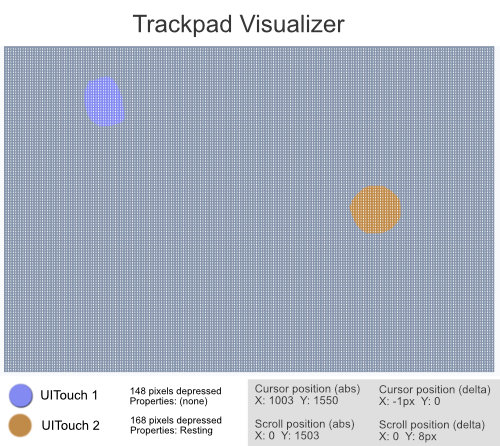 Where the following are present:

There may be usable ideas in this app﻿, which I haven't tried to get working but is described briefly here﻿. This seems to be a relevant question﻿ from the developer that built the app.