Published by Bill Harding May 23, 2019
views
A to-do list that auto-sorts using the Eisenhower Matrix (aka Covey Quadrants)

The internet is rife with smart people making good arguments about why to use the Eisenhower Matrix (also referred to as "Covey Quadrants﻿"). They say it offers a practical way to break down an ambiguous list of tasks. They say that it allows us to work on more of what matters. And that's where the agreement ends. After presenting the Eisenhower Matrix as a paradigm for organization, each source veers off into its own exploration of how to apply the idea. Many advocates for the Eisenhower Matrix don't even attempt to get specific about how you'd use it.

For me, this was a problem, because my day job as the CEO of three products requires me to constantly make decisions about where to focus. The paradigm of using "Importance" and "Urgency" to sort tasks sounded like exactly what I needed. But it did me no good as a hand-wavy concept. What I needed was a to-do list like Wunderlist or Todoist, where each task could be designated as "Urgent" or "Important." This would help the app decide which tasks to focus attention on at what time. Basically, I needed a system to help me do this with my todo list: 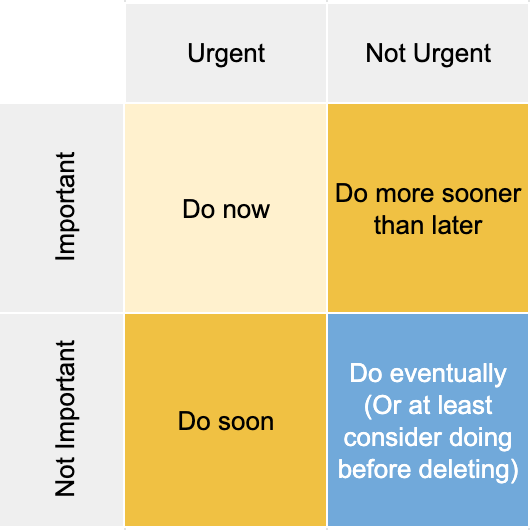 And so, in 2017, we set out to build a product that could use that idea to sort a todo list.

The first major challenge we encountered was that the "right" task to work on depends not only on urgency and importance. Equally important considerations are 1) if the task is due at a particular time and 2) how long the task will take to get done. We had to somehow mash together all three factors﻿ if we were to make a good pick on what task to bubble up to the top of a long list.

Here's how we ended up deciding to do it:

Maybe a little too specific? 😉 What the hell is this chart illustrating?

Each task in Amplenote is assigned a Task Score. On the day it's created, its Task Score starts at 1. Each day the note containing that task is opened, the task score increments by some amount. The rate at which the task increments depends on which properties the task has been assigned. Enter the graph.

If the task is due at a particular time, that supersedes the above and makes its way straight to the top of your list on the day it is due (you can always snooze the task﻿ if its due date is flexible). Otherwise, the points gradually accumulate based on the judgement of your past self. Below, we'll take a quick ride through the process of designating a task as "Urgent" or "Important," so you can see how it works for yourself.

Here's what it looks like if you open up a task in Amplenote (by clicking the expander icon﻿ or using the hotkey﻿):

At first, no properties are selected, its Task Score (right side) is a lowly one. But hark,

It has now been marked as "Important," which begins its upward ascent in Task Score. Every extra day the note containing this task is opened, the Task Score grows. The higher those values climb, the more attention we draw toward that task.

You can probably guess what comes next:

If it's marked "Urgent," the algorithm is now in "mildly concerned" territory. It expresses this concern by turning its left side indicator blue﻿.

The more days this task sits on the list, the more it competes against the heavyweights of your todo list﻿. For most users, a task with these properties would top their list﻿ within 3-5 days.

linkTransparent until you need it 🤫

The best designed features are those that solve a problem without adding complexity. It's a delicate balance to "be there when needed" while not adding undue clutter. When it comes to combining the Eisenhower Matrix with a todo list app, we've tried to err on the side of staying out of our customers' way.

Most of the time, users don't bother designating a task as "Urgent," "Important," etc. If you're completing 20+ tasks per a day, it's too much of a time sink to be constantly labeling tasks. Task Score has no problem adapting to this common use case -- it's the blue line on graph we opened with﻿. These tasks accumulate Task Score very slowly.

So if you want to keep it simple, you can just use Amplenote like Google Keep.

Buuuuut since you've read past the 500th word in an article about the Eisenhower Matrix, you might be the sort of person whose problems aren't totally solved by Keep. Even for power users, you'll probably still apply the "Urgent" or "Important" labels sparingly. I find most everyday tasks are too ephemeral to be worth it. The exceptions are, by their definition, important. That's when the Eisenhower Matrix descends from above to help usher your brilliant new idea to the top of your personal "task mountain." 🕊️ With all due haste! 🕊️

My greatest personal benefit from Task Score isn't any of the above, though. For me, the headline benefit is having the confidence to keep a long list while trusting that everything will either 1. get done or 2. get clarified/broken apart or 3. get trashed recycled ♻️

I love keeping a list full of maybe-junk (/maybe gold) that can get done whenever. See for example this stretch from my irl list﻿. It's long on esoteric tasks that should, eventually get done -- but none are pressing. Half will probably be deleted without action taken. The point is that everything gets captured, including garbage. With an auto-sorting todo list, I can hold these maybe-garbage ideas as they gestate, down in the low-rent district (anywhere past 30th) of my todo list. By the time they percolate back to attention, it's easier to assess whether they were keepers.

As I recently joked to Jordan, "the type of tasks that I'm not doing right now are the most impressive tasks I've ever not done." He cocked an eyebrow, not seeming too impressed by what I wasn't doing. But my point was that since I'm choosing not to work on so many important tasks, the marriage of Eisenhower to auto-sorting is working exactly as it should. ✅

Nobody cares about my opinion on whether the Eisenhower Matrix is a great way (the best way?) to organize tasks. I'm some programmer rando that blogs from my note taking app. But the number of credible sources in favor of organization via urgency/importance is compelling: 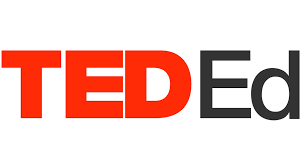 If you'd like to peruse some of them yourself:

Gary Keller author of "the ONE thing"﻿

In addition to helping with your Eisenhower Matrix needs, Amplenote also aspires to be the most transparent security-minded﻿ product among the major note taking and todo list apps. Give us a try if those match unmet needs of yours?