The pursuit of long-term goals is a defining part of the human experience. It promises to translate our most precious dreams into lived reality. Which sounds pretty good, right? And yet, according to the best available science, only about 8% of goal setters realize their goals﻿. If long-term goals are so essential to realizing our hopes and dreams, why are we so bad at sticking to them?

Luckily, I have a lifetime of goal setting failures to probe for answers. The common theme behind my failures snapped into place when I read this popular article about procrastination from WaitButWhy﻿. This article focuses on the "Eisenhower Matrix," which puts goals into the following four quadrants: 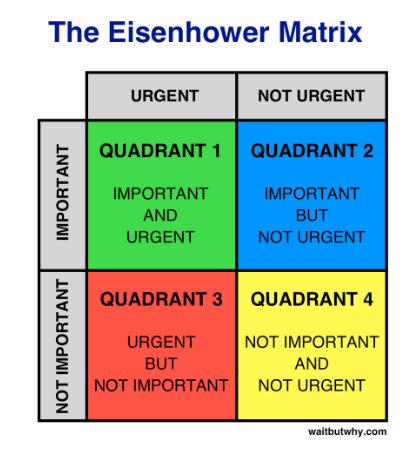 The Eisenhower Matrix organizes tasks into quadrants based on urgency and importance.

If you're like most people, you probably tend to inhabit quadrants one﻿ and three﻿ at work – whatever seems most urgent on a given day receives your attention. In your personal life, you might relax in quadrant four﻿ and dabble in the personally urgent as necessary.

Long-term goals fall into the second quadrant (henceforth, "Q2") of the matrix: they're important, but they're never urgent. It's little wonder why this region gets about as many visitors as the top of Mount Everest. Q2 is a region primarily inhabited by the world's most industrious and successful achievers – people who identify a goal and have the willpower to run it down over a long stretch of time.

That's great for those folks. Round of applause. 👏👏👏 But what does it take for everyone else to make a dent in the long-term goal that matters to them?

To understand why many people struggle to achieve long-term personal goals, let's look at a real-world example. We'll use the author's life as fodder, since he's readily available, and very cheap. A couple years ago, I decided that I wanted to be sure to call my grandma at least every month. The goal appealed on many levels, but absent any specific nudge, I hardly ever seemed to follow through. It just never seemed like "right now" was the time I would start on a goal that I could easily do the next day.

How could I possibly fail at an important goal that wouldn't take more than 20 minutes? 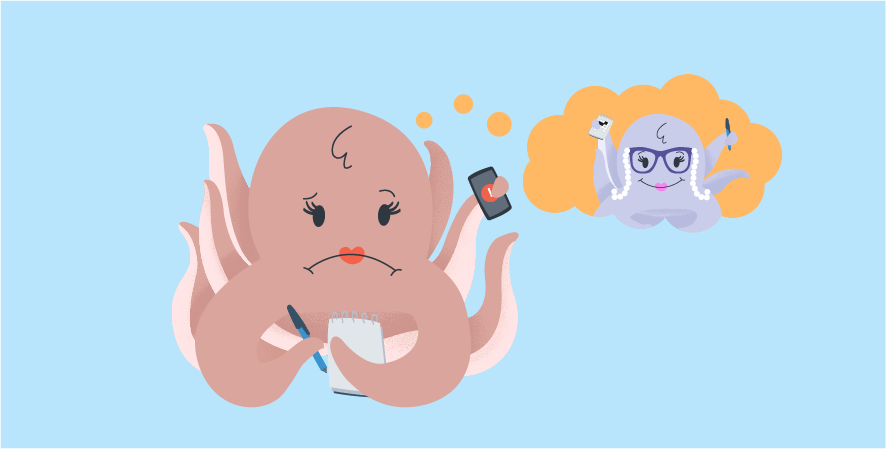 The same way that you probably fail at these goals all the time.

When it comes time to do that brief but unpleasant task, our brain somehow gets stuck in "neural tar paper." All progress is disabled. The creativity our mind can apply to fashioning excuses would be dazzling, if it weren't so depressing. Skeptical that this applies to you?

linkWhat was the last long-term goal that you followed through on and completed?

For most people I've known, long-term goal victories are few and far between. The most basic excuse not to call grandma is that it's hard to remember. It's an infrequent task nestled in an overcrowded life. Beyond that, there are layers and layers worth of excuses to justify abandoning long-term goals. Whatever feels most urgent will usually work.

"Aha," says the modern internet user, "so why don’t I just schedule my call to grandma on my calendar, like I would with a recurring meeting at work?" That idea almost works to prevent "I forgot" as an excuse. But the calendar-based solution has its own problems.

What time and day should you schedule the task? Spoiler: it doesn't matter. No matter what time you choose, there will be months where you're busy that day. Or you just aren't feeling it right then. Or grandma is out playing pinochle with her frenz. Bad news: the moment you dismiss that calendar reminder, you're on your own.

Back to reality: I'm probably around 70-80% on-time with this monthly goal over the ~30 months I've pursued it. The call has been, by far, the most fulfilling episode of whatever day it falls on. The great thing about Amplenote is that I know this goal won't fall by the wayside, even if I get behind for awhile. Like with Linux Touchpads﻿. Amplenote keeps it front-and-center on my personal todo list. Our forthcoming calendar will give you every opportunity to find a time for it.

A fixed schedule is too rigid for pursuing personal goals in the messy and complex real world – calendars are a source of many possible excuses. The failure of fixed schedules explains the growth of apps like Habitbull﻿, built specifically to help pursue goals and build habits. But these apps aren't quite enough either — it takes serious willpower to use an app like this for more than 3 months in a stretch, and willpower begins to erode shortly after a goal is set. A realistic, long-term solution to achieving Q2 goals must be integrated with the rest of life. And it has to be damn easy to prevent excuses.

For long-term goals, we don't want the calendar-style mandate that we work on the goal "every Sunday" or "every first Monday of the month." We want something more flexible, like "whenever I get around to completing this task, remind me to do it again 14 days later. And don't bug me about it for a while." There's a better way to schedule. Different apps call it different things, but here we'll term it "flexible recurrence."

In the "flexible recurrence" model, you create a task that becomes due at your own pace. For example, if you want to "call grandma" once per month, flexible recurrence marks that task as "due" on your list a month after you last completed it. If you want to volunteer once per quarter, you can set that goal to be due again 90 days after you last completed it.

It might seem weird to think of personal goals in terms of recurrence intervals at first. But any goal you want to pursue over time needs to be broken into pieces, and you need to figure out how often you can finish a piece. Especially for yearly goals — they need to happen at specific times, but it's not going to be whenever the calendar reminder goes off. Flexible recurrence eliminates "I'm busy right now" as a source of excuses.

Done right, a flexible recurring long-term goal will pop up on an ordinary todo list every once in a while. An ordinary todo list is filled with simple tasks that are satisfying to accomplish, so you sort of "ambush" yourself with the occasional audacious task. So long as that goal still matters to you, it works.

There are a handful of todo list apps that allow the type of flexible recurrence that meshes so well with long-term personal goals. These include:

As we will talk about in part two﻿, some apps handle flexible recurrence better than others. For example, the best apps make it easy to hide the task for a while after you complete it. If you called grandma yesterday, you don't want a reminder on your list again today. You want to be celebrated for your triumph, and then reminded to continue the streak in about 3-4 weeks.

Once you’re convinced that your goal is important, success becomes a matter of making a plan and executing it. Finding conviction in which long-term goals matter to you is the most important step you can take. Once you're sold on the benefits your goal will bring, then success becomes just a matter of following a good plan. Flexible recurrence keeps your goal top of mind, while still affording you leeway about when to work on it.

Of course, even when you have the right tool (flexible recurrence), your brain will still make excuses to induce procrastination. "Now" never seems to be the perfect time to make progress on a goal. For many, the default operating mode is still based from urgency from the third quadrant. So, how do you combat your brain’s urge to procrastinate? It helps to have a framework to minimize excuses. Stay on track with tactics like these:

Knock a couple of small items off your list at the beginning of each day. This generates the momentum to tackle the more arduous goals on your list. Develop a process where you "park downhill﻿" and leave yourself a few easy emails to respond to at the beginning of the day. Feeling excited by your progress can be sneaky-motivating.

An important-but-vague goal like "Connect with family" is inviting your future self to procrastinate for lack of a starting point. Such tasks are at high risk of becoming barnacles﻿. If you've found yourself considering a task 3+ times without starting it, reframe it to be more specific and bite-sized. In this case, create a task to call grandma. You'll do it and be glad you did.

When your personal todo list is stuffed full of audacious Q2 goals, you're probably going to find a reason to avoid opening it. When you hear about an interesting concert, movie, art exhibit, restaurant, or something else you look forward to — add it to your personal todo list! The biggest failure with todo lists is also the most common: losing the motivation to open them. Give yourself reasons to come back to the list later – commit to finding and pursuing fun as a regular part of your todo list-making. 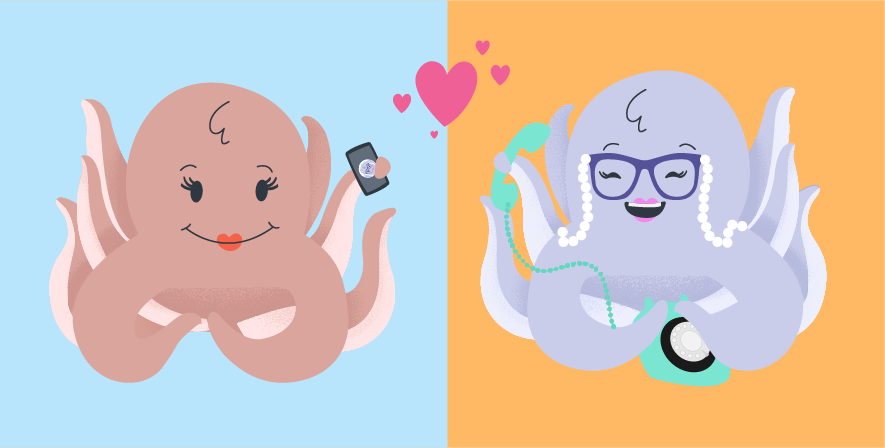 The reason long-term personal goals are so damn hard is that our brain isn't wired for them, and we often use the wrong tools to augment our brain's shortcomings. When you have a goal that really matters, start by setting it up with flexible recurrence. Then, work to anticipate and minimize the excuses that your future self will try to make.

As a would-be goal setter who has spent 20+ years failing at goals, it has been a breath of fresh air to realize that even as I approach 40, I'm still getting a little better at accomplishing goals every year. Propelling me forward is the tools and tactics that I've discovered along the way. If you've had success in transforming from a goal setter to a goal achiever, we'd love to hear your story in the comments. What goals have you pursued, and what did it feel like to finally realize them?