Some values that have guided our company's evolution.

It's a bit strong to say the customer is always right, but when a company fails to abide its users, it drifts from its mooring. All Alloy products start with a kernel of who they are meant to serve. The only way we've found to build products is to have "the people they're meant to serve" be the same as "the people who are working on them every day."

As a starting point, our products satisfy our company's employees own needs better than any competitor. Once we hit that threshold, then we start incorporating more and more feedback from users who share our goals. One example is the Amplenote FeatureUpvote board﻿

On a long enough time horizon, the truth always wins﻿, even if it appears otherwise in the present. For business, "the truth" is whether we're building products that our customers can't live without.

The key to building products customers can't live without is providing them value and treating them like you'd treat friends. Friends listen when you have a reasonable request. They treat you like an adult in support interactions. And they definitely don't make you call to cancel your subscription﻿. We've made canceling (and exporting all notes) a cinch, as a challenge to keep to ourselves to keep delivering value.

linkRevenue is the "value delivered" compass

People tend to assume that money is the primary objective of business -- because it almost always is. But that's not a law of nature. Companies could construct incentivizes that lead them to do more good for the world. Why, then, is revenue so obsessed over by CEOs? Because they are chosen by VCs or the stock market, both of which tend to steal short-term focus from the customers themselves.

Revenue is not the primary objective of alloy.dev for those reasons. But we do believe that it conveys signal by way of reflecting product/market fit in a way that nothing else can. When our products are good enough to pay for, that's when we know that we're delivering meaningful value.

This belief took a long time for us to feel confident espousing, because it's clear that many of the smartest people in the world end up as VCs. Those VCs have infinite incentive to identify the best companies, and they have equal incentive to help those companies become towering successes.

Still, when we read about a competitor receiving an infusion of cash from a VC, we lick our chops, because we know the clock has begun ticking for them to find their way to an exit﻿. We lived our own miniature version of this game early in Bonanza's history﻿, enough to become familiar with how it seems to usually play out. In our experience, it goes something like:

Spend 6-12 months progressing from "establishing a relationship" to "convincing ever-more-important stakeholders in the VC org that there is sufficient product/market fit" to "bickering about valuation" to "weeks or months on devastatingly tedious diligence" to "having them back out half the time (crushing your spirit by squandering all the willpower invested)" to, finally, "YAY you secured the bag! 🍻 Now go find a way to deploy millions of dollars less efficiently than ever before, at the expense of time spent on what you were already doing well﻿"

Become accountable to more and more stakeholders﻿, who will present ideas based on what they read about other companies doing (irrelevant to the creation of novel tech) and what they personally wish would be done (irrelevant unless they are the target customer).

Features, features, and more features in pursuit of customer acquisition. Ignore bugs and tech debt as long as possible. 🙈

In about 5 years (10 max), the fund matures and the VC board seat insists that the company must focus primarily on finding the exit

Visually, the difference between products built by the two types of companies might look something like this: 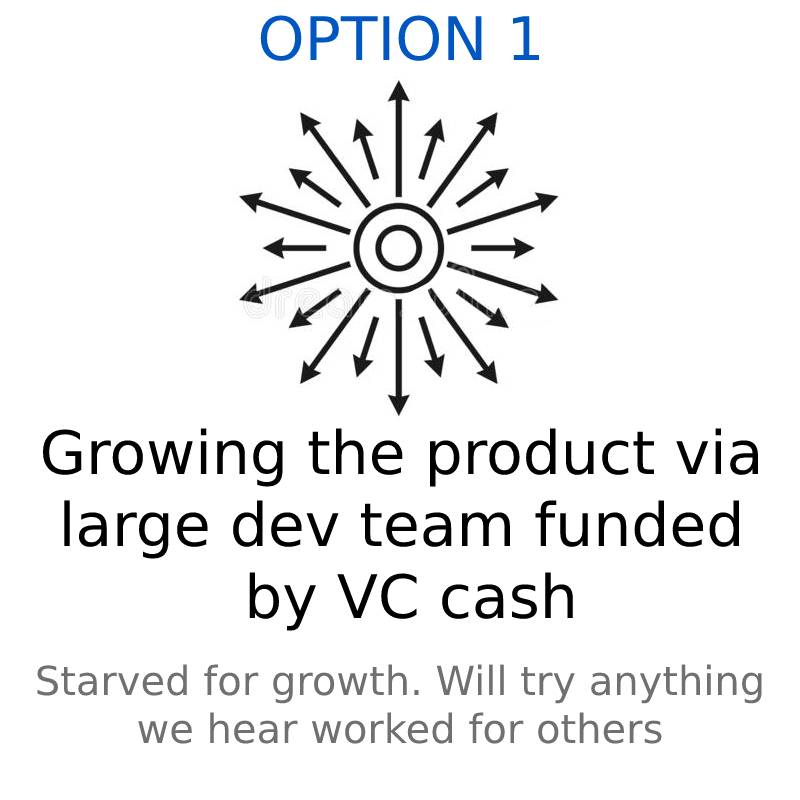 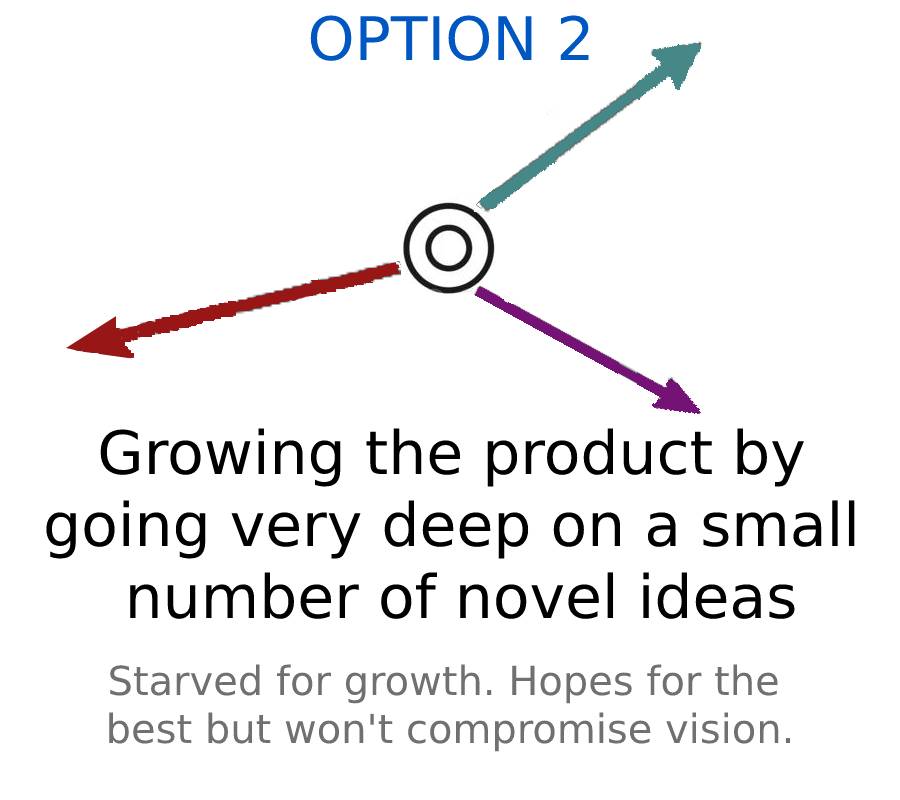 In terms of Amplenote, you might say that the "green arrow" is our "Idea Execution Funnel," the purple arrow is "Rich Footnotes," and the red arrow is "fixing bugs before adding features." Three pillars of the company that we will consistently expand out further and further, at the expense of ignoring whatever is making ClickUp grow so fast in the near-term﻿

Most companies don't have the luxury of choosing between the two options, because they need runway at any cost. Alloy does have the luxury, so we've concluded Option 2 is our best bet to differentiate.

We prefer to build products with fewer, better people. There are a couple reasons.

The first is that it's too easy to underestimate the costs of communication. Even with the best tools available today, or the best tools that could hypothetically be built, there's still going to be a lot of signal loss when you move from one person's brain to the next. The most efficient business is one that features the least communication, which is inherently lossy.

Second, compensation for developers remains distorted as of 2020. The best developers get 3-5x more done than average developer, and 10x more than a poor developer, as measured by a dev throughput metric such as Line Impact﻿. Meanwhile, the compensation differential for the "best" and "worst" developers currently ranges around 2x. That's a cavernous arbitrage window if one identify and land the type of coworker they seek.

Plus, there's something ineffable about a small team, fighting for survival against long odds, that begets refreshing levels of focus on the work itself instead of whatever Facebook worries about.

Not to mention, the fewer stakeholders, the more each of them have to gain by creating a mega-quadrillion dollar long-term success. Nobody wants to sell if they can’t even afford a backup yacht.

linkYes to Important tasks, no to Urgent ones

This belief is baked into Amplenote as a first-class citizen﻿. What this point addresses is the tendency of companies to tilt toward focusing on whatever opportunities seem new or urgent. It's natural human tendency to focus attention on whatever came up most recently, but it's toxic to making rapid progress on the tasks that are Important.

We define "Important" tasks as those that align with the goals of the person or company. You can read more about our definition of what makes a task urgent vs important vs recent in this essay﻿.

The main "trick" to focusing on important tasks is to live the life less synchronous. The better tasks can be separated from their temporal context, the more "timeless" you might say they are, the more likely they matter profoundly. This is the heart of why urgent/recent tasks bleed efficiency.

The first and only "web design" book Bill has read is Don't Make Me Think, by Steve Krug. In it, he introduces the idea of a "mensch." A mensch (as I recall from reading it 15 years ago) is a person who desires nothing more than to be a doting assistant. They're always thinking about the experience from your shoes, and finding opportunities to dazzle and amaze without making you think.

Attention is a commodity. It is to be treated as a gift. We have never published an interactive (or, god forbid, mandatory) tutorial and I hope we never will. Good UX helps the user feel like an overachiever without reading the instruction manual.

The best moments happen when we help customers do something they couldn't do before. When we can combine that with no instructions necessary, look out. 🔥

One of the five "official" company values painted on our office wall is "excellence in what matters." It's another way of saying that we try to pick a few features that are most useful, and just keep going deeper on improving and connecting them over several versions.

We'll never strive to be "well-rounded." Young products that users can't live without have sharp edges.

These are three qualities shared by practically Alloy team member (except Jack, but we fired him﻿). They hedge against getting carried away thinking that we know more than we do.